The Avebury complex is one of the principal ceremonial sites of Neolithic Britain that we can visit today. It was built and altered over many centuries from about 2850 BC until about 2200 BC and is one of the largest, and undoubtedly the most complex, of Britain’s surviving Neolithic henge monuments.

The exact sequence of construction of the banks, ditches and stone circles at Avebury is still not completely understood.

Limited excavations and more recent aerial and geophysical surveys indicate that many other features once existed within the enclosure. It is quite likely that, before the stone circles were erected, timber circles and structures may have originally filled the area within the bank and ditch – as at other henges in this part of Britain.

At some stage, two avenues of stones were also built, linking the Great Henge with other ceremonial sites at Beckhampton and Overton Hill. The huge man-made mound of Silbury Hill stands not far away and is also broadly contemporary with these monuments.

The impression gained is of a landscape being shaped for rituals that involved inclusion, exclusion and procession.

If this is correct, then the various monuments may have been built as public ‘theatres’ for rites and ceremonies that gave physical expression to the community’s ideas of world order; the place of the people within that order; the relationship between the people and their gods; and the nature and transmission of authority, whether spiritual or political.

The length of time over which the Great Henge and its two avenues were built is so long that it suggests the community’s relationship with its environment may gradually have altered. Changing rituals may have been the driving force for the building of new monuments and for their eventual abandonment around 1800 BC. 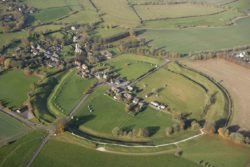